The wonderfully talented Ronnie Sidney, II, author of the award winning nonfiction graphic “Rest in Peace RaShawn Reloaded” spoke to 6th grade students at Crittenden Middle School! The students were so totally moved by his message of justice and equity for youth with learning disability challenges, for youth who are bullied due to intra-racial colorism, and for youth who walk in fear from gun violence. Ronnie is a licensed social worker and has the magical skill to talk with and motivate youth, Today, the magic occurred at CMS! 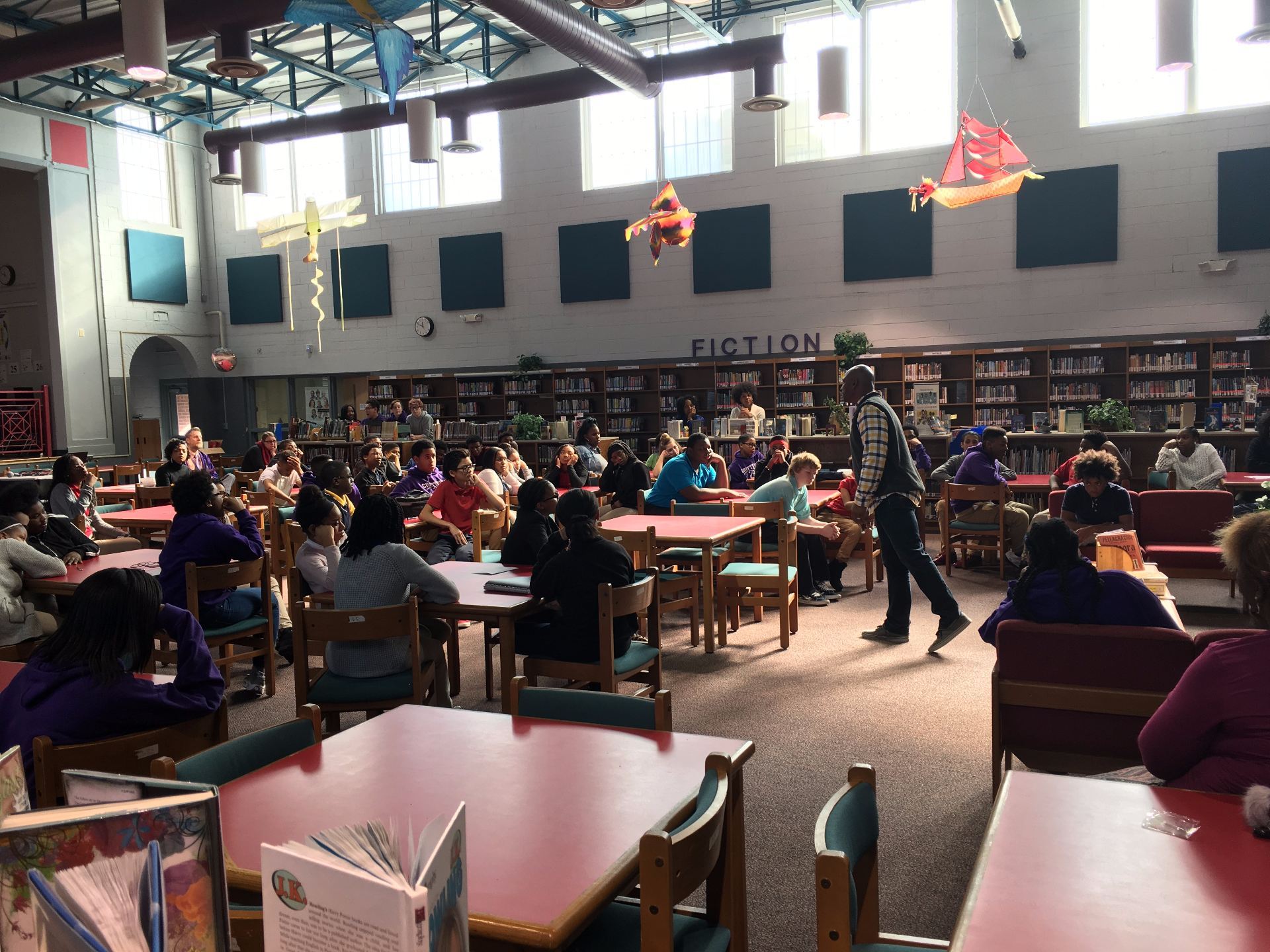 Alton came down the first time and paid his own way in April 2016.  He spent the entire day with us and I was simply speechless.  This was the Oklahoma state author of the Year and the Library of Congress’s pick for Book of the Year author!  His first book, The Boy Who Carried Bricks is an incredible autobiographical novel that shows how urban issues are in suburban settings.  He speaks of mistreatment to the point of unbelieving. As a child he had to go to the doctor twice a month just to get the cock roaches pulled out of his ears.  After the kids read his book and he came to the building, they were stunned into silence that he was there in front of them and that he was a success after so much negativeness in his childhood. Alton was so mistreated that he signed his own self into the foster care system and went from the pot to the flame in terms of ill treatment.  Because of his story, he has caused the entire state of Oklahoma’s foster care system to change.  The sequel to his autobiography is Aging Out, which shows all the mistakes he made after high school, before he got on the straight and narrow, and his latest book is a picture book called The Boy Who Dreamed Big.  This book is actually a poem and is a wonderful uplifting book about never letting go of your dreams…perfect for a graduation gift.

On his second visit in January, he awarded one of our students a mini iPad for her drawing urging students to be inspirational.  Inspire someone by telling them something good about themselves.  If you want to choose to inspire, go to our school sight and sign the pledge at https://altoncarterstakethepledge.wordpress.com/ 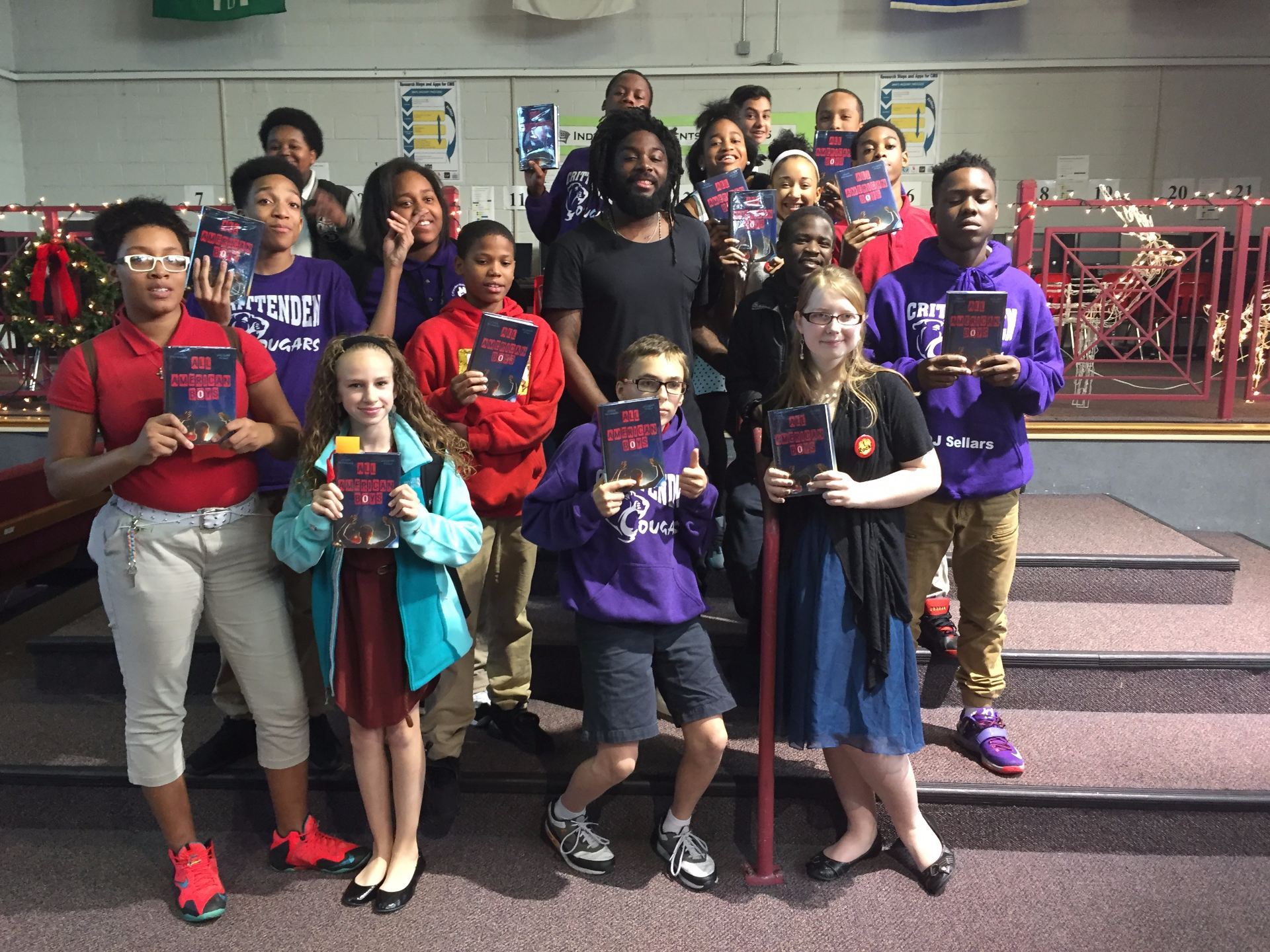 When Jason can to visit us we were a nervous wreck because he had double booked himself and had to pay extra for the airfare due to his oversight.  He was detrimental to our growth as individuals.  His impact on the students and everyone he spoke with was incredible.  He was a new author that had just won the John Steptoe Award for When I was the Greatest (CSK 2015) for a new and rising author.  When he came to us, he was one month away from winning a DOUBLE CSK award for The Boy in the Black Suit  & All American Boys …a first in the Coretta Scott King awards!  In 2016 he won the Schnieder Family award for As Brave as You.  He told us that he had 11 books on the shelf, just waiting to drop.  He is currently authoring 2 sets of series (The Ghost series Ghost is the 1st installment and Patina drops in August 2017) and the new Spiderman series Miles Morales drops in September.  But what we have all itching for  since last fall 2016 is the book in verse YA urban title Long Way Down which is 60 seconds in the life of the protagonists.  SHATTERINGLY REAL! 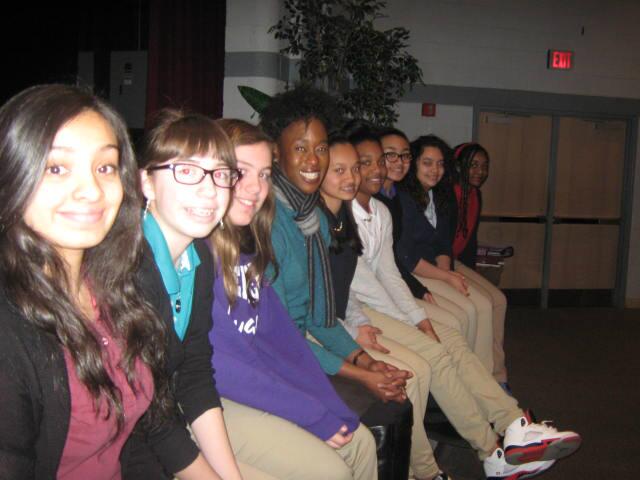 Margot is in the midst of research on one of the most interesting historical cover ups of all times:  NASA’s human computers!  NASA had a staff of women in the 50s, 60s, and 70s that calculated all the math for their space programs.  It’s amazing how these math and engineering geneouses broke through the gender gap during a time when women were fighting for social and political acceptance in our country.  These women, according to Mrs. Shetterly, determined the trajectory for the spaceships’ that were flown by such famous astronauts as John Glen.  To view her entire presentation, which occured March 24, 2014, please click on the following link: http://mariehollandlibrary.edublogs.org/2014/03/26/hidden-story-presentation-march-24/.

Nosaze Enoma, author of “My Life: The Movie” 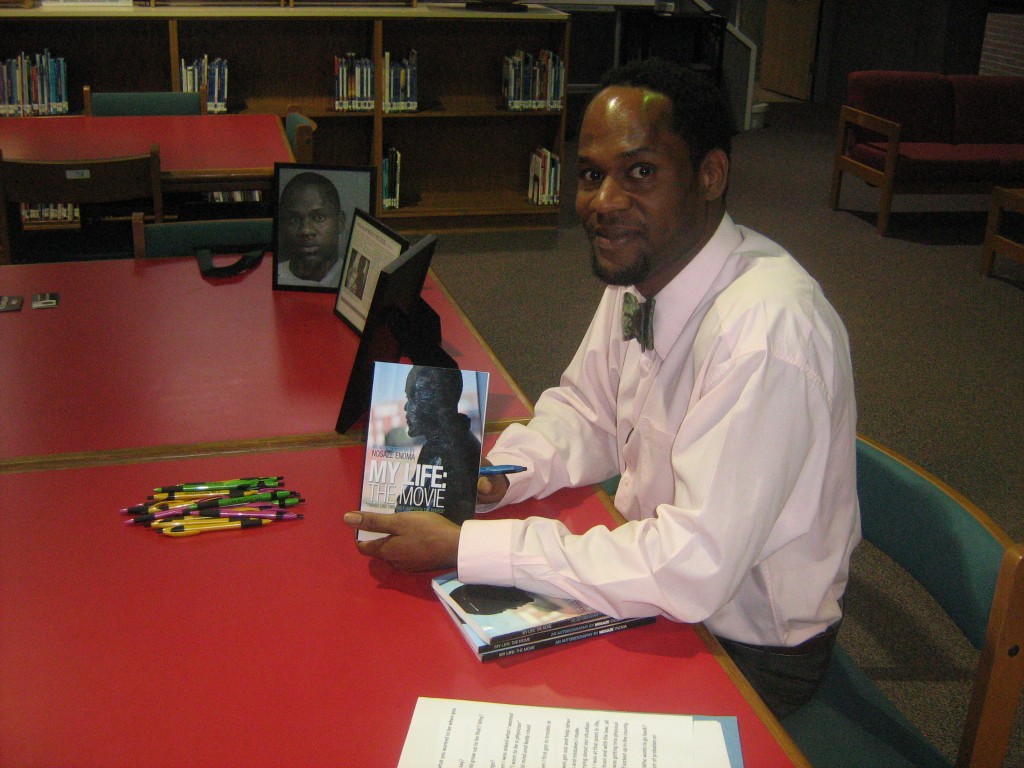 On Tuesday 26 February, 2013,  Nosaze Enoma, author of his urban autobiography My Life: the Movie (Create Space: 2012), shared his life story on how he pulled himself up out of being a product of the streets of  Wyandotte County, Kansas and is now an adjunct professor at Norfolk State University.  Among members of  Nosa’s specially invited audience were the members of  our Gents Club.  The Gents Club members are boys who are striving to be the first generation in their family to obtain a college education.

Powered by WordPress | Hosted by Edublogs | Protected by CloudFlare